Emelianenko (38-6-0) has not contested a bout since his vicious first-round knockout loss at the hands of current Bellator heavyweight and light heavyweight champion, Ryan Bader at Bellator 214 in January. Speaking at the event, the celebrated Russian heavyweight underlined his delight to be fighting in Japan having rose to prominence, like Jackson, under the infamous Japanese banner, Pride.

“Nineteen years ago, I fought my first fight in Japan and ever since I have fallen in love with this country,” said Emelianenko. 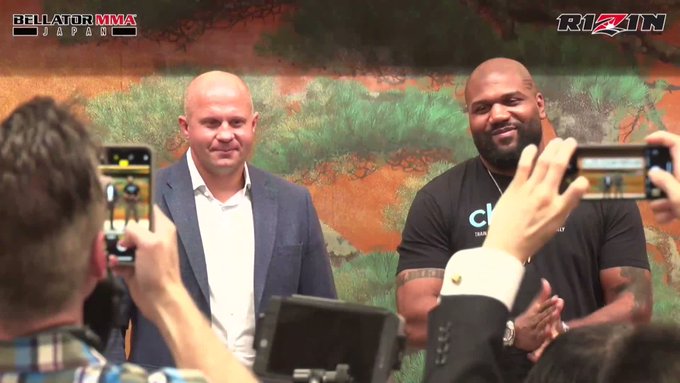 “I’m very happy to return and fight in Japan in front of the most unique atmosphere that I’ve ever experienced. I’m very happy to be able to do so with my opponent—a friend and a fight comrade who I fought side to side with in the same time. I’m very excited to be able to put on a great fight. I will work hard and do my best to put on a beautiful performance for all of the Japanese fans.”

Jackson (38-13-0) goes into the bout on the back of a win in his quadrilogy fight with Wanderlei Silva, who he stopped in the second round of their Sept. 2018 meeting at Bellator 206. Speaking at the press conference, “Rampage” insisted that Emelianenko is his “favorite fighter” and that he would fight anyone if it meant he could return to Japan to compete.

“I don’t know if you guys know, but Fedor is and has been for a long time my favorite fighter. It’s strange to have to fight someone that you look up to and that you admire so much, but I love fighting in Japan so I just wanted to come back here and fight. I’ll fight anyone they tell me too if they tell me that I’m fighting in Japan.”

After revealing the main event for the Saitama card on Wednesday morning in a Tokyo press conference, Scott Coker also explained that he planned to bring a team of three fighters from Bellator over to Japan for the card to face three Rizin fighters in challenge matches, citing Kyoji Horiguchi’s recent fights with Darrion Caldwell as examples of cross-promotional bouts the organizations have created in the past.

Also at the event, Rizin promoter Nobuyuki Sakakibara insisted that he was happy to help Coker and Bellator host its first event in Japan.

“Bellator will host its first event in Japan on December 29 and I’m very happy to help Bellator and Scott Coker to make this happen,” Sakakibara told the gathered media through a translator.

“I do believe that Dec. 29 will be a history-changing event and Bellator will be able to make that happen. I’m very happy that they will be able to work together, along with RIZIN, and we are pleased to be the witness of this historical event.”

Coker also revealed that it has yet to be determined whether the fights will take place in a ring or a cage.

Source: https://www.mmafighting.com/2019/10/9/20906052/fedor-emelianenko-vs-rampage-jackson-to-headline-bellator-x-rizin-event-on-dec-29
- I rent this space for advertising

Users browsing this forum: No registered users and 13 guests