Masato wrote:So odd to see a total caricature of the Alpha Male (Trump) side by side with a total reverse caricature of a leader like Trudeau going on at the same time. 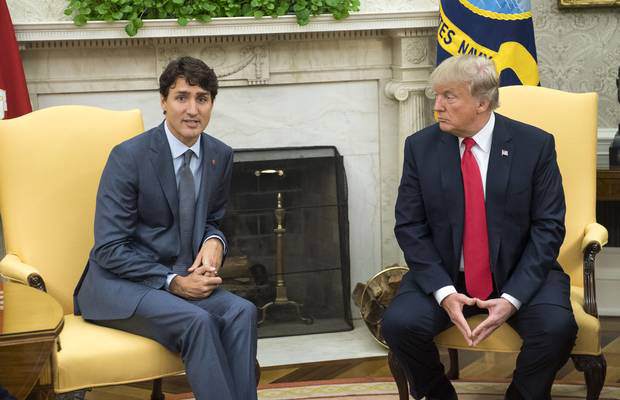 I made a mistake and I'm sincerely sorry

May 18, 2016 Prime Minister Justin Trudeau apologizes in the House of Commons for the Komagata Maru incident, where a ship full of people from India, mostly Sikhs along with some Muslims and Hindus, were turned away from Canada and sent back to Calcutta. A riot ensued upon their return, resulting in the death of 20 Sikhs.

May 19, 2016 Trudeau apologizes for elbowing NDP MP Ruth Ellen Brosseau as the prime minster tried to lead a Conservative MP through a crowd of NDP MPs during a tense debate in the House of Commons about assisted-dying legislation. “No amount of escalation or mood in this house justifies my behaviour last night. I made a mistake, I regret it, I’m looking to make amends,” Trudeau said.

Nov. 24, 2017 Trudeau issues a formal apology to residential school survivors in Newfoundland and Labrador. Thousands of indigenous Canadians were left out of a previous 2008 national apology issued by former prime minister Stephen Harper.

Nov. 28, 2017 Trudeau officially apologizes to LGBT Canadians in the House of Commons for decades of “state-sponsored, systematic oppression.”

Dec. 20, 2017 Trudeau apologizes after an ethics report says he broke conflict-of-interest rules during a family vacation at the Aga Khan’s private island. “The commissioner’s report this morning makes it very clear that I should have taken precautions and cleared my family vacation and dealings with the Aga Khan in advance. I’m sorry I didn’t,” Trudeau said.

March 26, 2018 Trudeau apologizes to members of the Tsilhqot’in Nation for an 1864 incident in which six chiefs from the nation were hanged. The incident stems from a deadly confrontation with a white road-building crew that had entered Tsilhqot’in territory without permission.

Nov. 7, 2018 Trudeau apologized for a Canadian decision in 1939 to turn away the MS St. Louis, which contained more than 900 German Jews seeking asylum from Nazi Germany. After the ship returned to Europe, 254 of the passengers would later die in the Holocaust.

March 8, 2019 Trudeau apologizes in Iqaluit for the way Inuit in northern Canada were treated for tuberculosis in the mid-20th century, calling the policies colonial and misguided. ““We are sorry for forcing you from your families, for not showing you the respect and care you deserved. We are sorry for your pain,” Trudeau said.

May 23, 2019 Trudeau exonerates Chief Poundmaker in the community that bears his name, the Poundmaker Cree Nation, and apologizes for the chief’s unjust conviction for treason more than 130 years ago. “I know that the exoneration and apology I have offered today cannot make up for what has been lost. But it is my hope that these words can mark a new beginning,” Trudeau said.

Aug. 15, 2019 Just a day after the ethics report on the SNC-Lavalin was released, Minister of Crown-Indigenous Relations Carolyn Bennett issued an apology to the Inuit of Baffin Island in Iqaluit. The apology is the result of the Qikiqtani Truth Commission, which was set up to investigate an alleged police conspiracy to kill sled-dogs — the commission found no evidence of a deliberate scheme to kill the dogs, but did paint a picture of wide-ranging hardships encountered by Inuit. “We failed to provide you with proper housing, adequate medical care, education, economic viability and jobs,” said Bennett.
el rey del mambo

BILLIONS of covid 'relief spending' unaccounted for. Trudeau will not reply to queries of where exactly all this money has gone.
Reporter claims over $40 Million PER HOUR has been spent since March 2020.

Real conspiracy theorists know that 'Emergency Spending' is always used as an excuse to transfer massive funds all over the place with no accountability. Same shit happened after 9/11, missing Billions and Trillions everywhere lol