BUENOS AIRES (Reuters) - A team of Argentine paleontologists digging in Patagonia have discovered the remains of the largest dinosaur belonging to the raptor family ever recorded. 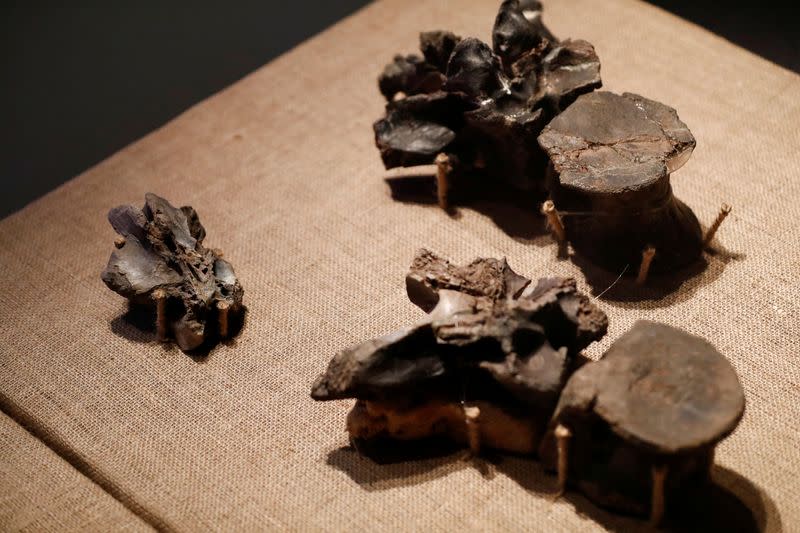 The dinosaur, a new species named Maip macrothorax, was between nine and 10 meters (29.5 and 32.8 feet) long, while other "megaraptors" were no longer than nine meters, said one of the scientists who participated in the discovery, Mauro Aranciaga Rolando.

"This animal is very large in size and we were able to recover a lot of remains," Aranciaga Rolando told Reuters on Wednesday, when the fossils were shown at the Bernardino Rivadavia Natural Sciences Argentine Museum in capital Buenos Aires.

The fossils were discovered in March 2019 in the Patagonian province of Santa Cruz, days before strict COVID-19 pandemic restrictions were enforced, said the National Scientific and Technical Research Council, to which the experts who found the dinosaur belong.

Due to the pandemic, paleontologists initially had to distribute the fossils between them and analyze them at home.

The carnivorous dinosaur is thought to have inhabited what is now the southern tip of Argentina 70 million years ago during the Cretaceous period.

Megaraptors were animals with an agile skeleton, a long tail that allowed them to maneuver and balance, a long neck and an elongated skull with more than 60 small teeth, said Aranciaga Rolando, who explained that the sharp-ended limbs of "Maip" were the animal's most dangerous weapon.

https://news.yahoo.com/argentine-scientists-discover-fossil-largest-225706758.html?guccounter=1&guce_referrer=aHR0cHM6Ly93d3cuYmluZy5jb20v&guce_referrer_sig=AQAAAFaaqXEZjqxX819HP4ga4jm-giIU7HKJLpvQCHbOGjNJoK5QWA-RrmfnEtgeK48k0xbMbGL1bingxx0h11VSUcbKCpNqM5UKya7QpU5032VI3G98zK3YEIiLAJ0I-0XSrlHy36iqN1YXHQGd0oY2xVyCKbmKzGni2UmZm-1V6dg0
- I rent this space for advertising